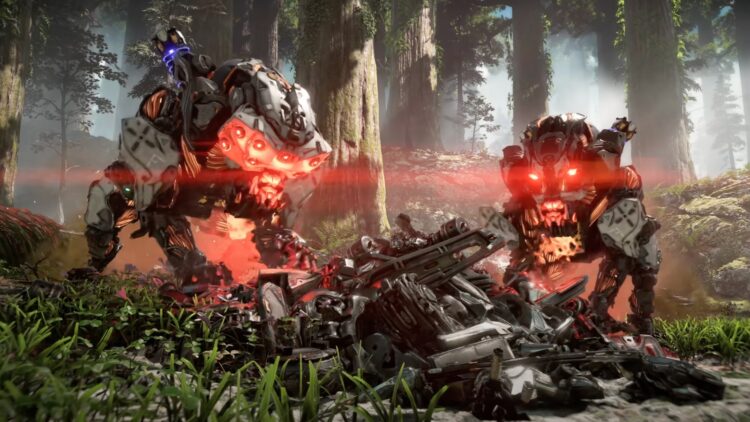 Also check out:
Everything We Know About Horizon Forbidden West
The Best Horizon: Zero Dawn Merchandise

Guerrilla Games has so far confirmed several new machines for Horizon Forbidden West. While these may not be the complete list of machines appearing in the sequel, this is everything we know about the machines confirmed so far.

Tremortusks are mammoth-like Combat class machines that made their debut appearance in the first Horizon Forbidden West trailer. These machines are heavily armoured and are controlled by a faction within the Forbidden West known as the Regalla. Tremortusks attack with cannons and a flamethrowing trunk, and paired with their difficulty in being taken down makes them some of the most deadly machines around.

Bristlebacks are another machine in Horizon Forbidden West that resembles a warthog. As an Acquisition class machine, Bristlebacks harvest resources to assist GAIA’s terraforming program, but they are highly aggressive and, much like the real-life animal, will use their tusks to protect themselves.

Burrowers are machines similar to otters. As a Reconnaissance class, Burrowers travel in groups and help Acquisition class machines find land for terraforming and harvesting. Burrowers can explore both land and water, and, according to Guerrilla Games, can stun enemies, alert allies to danger via high-pitched sounds, and tunnel underground to resurface in unexpected locations.

Tiderippers are Acquisition machines that resemble plesiosaurs. Like Burrowers, Tiderippers explore both land and water, making it one of the few new aquatic-based machines. According to Guerilla Games, Tiderippers filter sediment for resources and can deliver devastating attacks on land and in water.

Clamberjaws are another Acquisition class machine found in Horizon Forbidden West. Resembling baboons, Clamberjaws have been described by Guerilla Games as fierce, agile, and fast. They gather in packs, can climb walls and trees, and use their abilities to weaken enemies. Clamberjaws can also cover their faces with a mask-like component, making it harder to face them head-on.

Sunwings are Acquisition class machines found in the Forbidden West that resemble Pterosaurs with solar panels as wings that are used to store energy. Fast and agile, Sunwings patrol the skies and fly at great heights to collect as much energy as possible. They can be seen in the Horizon Forbidden West machines trailer.

Rollerbacks are new Transport class machines that can roll into a ball and leave a trail of fire in its wake. The machine first appeared in the Horizon Forbidden West machines trailer, and according to Guerrilla Games, Rollerbacks can repair themselves by attracting removed armour plating back onto their body.

Clawstriders are Combat class machines that made their first appearance in the Horizon Zero Dawn comic book series, where they attacked the Carja village of Rising Light. The machine moves in packs and is incredibly aggressive as well as territorial. The machines are used by the Regalla as mounts, and Aloy will be able to override them and use them as mounts too.

Slitherfangs are cobra and rattlesnake hybrid Combat machines that can be found in the desert and tropical regions of the Forbidden West. The machine slithers along the ground and can coil around buildings and ruins. When it comes to attacks, it fires pressurised acid streams, fire arrows, and fire lightning waves from the rattle on its tail.

In addition to all of the new machines making their debut appearance in Horizon Forbidden West, several machines from the original game will be returning. While not all of them are coming back, the majority are and you can find a complete list of the Horizon: Zero Dawn machines confirmed to be returning.

Thunderjaws are Combat class machines and arguably one of the most famous machines from the series. Taking on the appearance of a Tyrannosaurus Rex, the machine is gigantic and heavy, and usually can be found alone. It utilises lasers, disc launchers, and cannons to take on enemies, and it’s one of the most feared machines within the series.

Snapmaws are crocodile-like Acquisition machines that can be found throughout Horizon: Zero Dawn’s watery regions as they work to purify water. They are agile machines that can shoot Chillwater projectiles at enemies to slow them down. They can also lunge at enemies and use their tails to attack.

Watchers are one of the most well-known machines in Horizon: Zero Dawn and they’re returning for the sequel. These Reconnaissance machines are based on small dinosaurs and were initially used by GAIA to assist in terraforming, but are generally used as patrol guards. Watchers are generally found in groups. They alert allies and herds of machines after spotting a threat, and they attack by throwing themselves at enemies, stunning opponents with a flash of light, and they can fire energy projectiles.

Striders are horse-like machines that Aloy can override and mount for quick transportation. These Acquisition machines are often found in herds and are often accompanied by recon machines like Watchers and Longlegs. They tend to run at the sight of an enemy or when alerted by a Watcher or Longleg. If they do attack, they usually do so by kicking and charging at enemies.

Chargers are Acquisition machines similar in behaviour to Striders; they can be found in herds accompanied by Watchers or Longlegs, and they may run at the sight of an enemy, but will do so less often than Broadheads and Striders. When attacking, they charge at and kick enemies.

Grazers are deer-like machines similar to Striders and Chargers. These Acquisition machines can be found in herds, usually accompanied by Watchers and Longlegs, and flee from damage. If forced to attack, they can charge at enemies, kick targets, and use their antlers.

Ravagers are Combat machines that are similar in appearance to wolves. Found in drier regions, Ravagers utilise cannons, can leap and attack enemies, and unleash electrical charges that hit enemies within a closed distance.

Glinthawks are vulture-like Acquisition machines that cut and process parts and resources from wrecked and destroyed machines. These machines can usually be found in groups perching or flying, and attack from the air by shooting freeze projectiles or swooping down and attacking with their claws.

Stormbirds are solitary and gigantic bird-like Combat machines that were created by GAIA to detoxify Earth’s atmosphere. Stormbirds tend to stay high in the air and only land to attack enemies. When they do attack they perform powerful electric attacks, swoop down and unleash devastating melee attacks, and they can crush enemies too.

Tallnecks are Communication class machines that are non-hostile and were designed to enable long-range communication. Similar in appearance to giraffes, Tallnecks are solitary machines that walk in circular paths. Aloy is able to climb these machines and override them atop their disc-like heads to unlock sections of the game’s map.

Stalkers are deadly Combat machines Aloy encounters later in the game. Aggressive and agile, these machines use stealth to take on enemies, and can cloak themselves via their Stealth Generator. Stalkers can be found alone or in packs in dense jungles. Their attacks involve shooting deadly darts, dropping proximity mines, and they can unleash devastating melee attacks with their claws and tails.

We hope you’ve gained an understanding of the different machines that will be appearing in Horizon Forbidden West. Since the game still hasn’t been released, we may find that some of the machines currently unconfirmed may eventually return and we may also see additional new machines too.