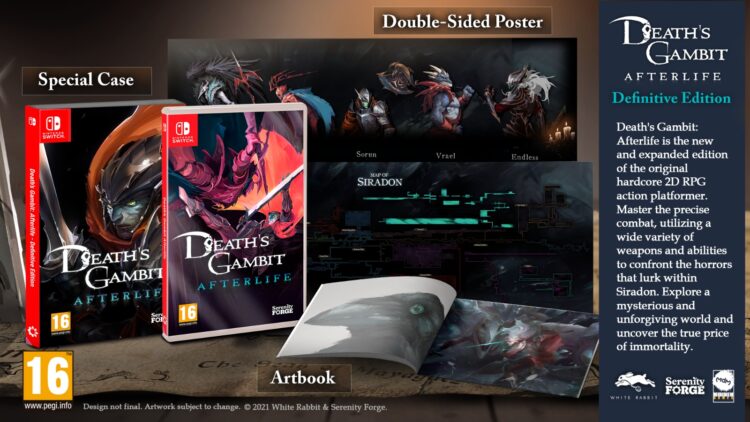 Death’s Gambit was originally released in August 2018 for PC and an expanded edition of the game, Death’s Gambit: Afterlife, was released digitally in September 2021 for the Nintendo Switch.

The game is now getting a special boxed edition, which will release in 2022. The special edition will include a specially created box with artwork of main character Sorum on the cover, as well as a unique art book and a double-sided poster.

Death’s Gambit: Afterlife is set in a medieval world shrouded in mystery and inhabited by immortal souls. Players take on the role of Sorum, a servant of Death, who must learn new skills and master an array of weapons on their mission to destroy the source of immortality.

Along the way, players will have to combat horrifying enemies and fight challenging bosses using all of the weapons in their arsenal. The game has deep RPG elements; there are seven playable classes and players can customise Sorum with new equipment and talents, and build their own individual playstyles.

The Afterlife edition of the game includes over 20 beautifully-rendered levels featuring quirky characters from all walks of life, as well as over 100 talents to utilise, around 20 bosses, a crafting system, and alternate endings too. It also includes the Insanity, Heroic, and New Game + modes.

Death’s Gambit: Afterlife is available digitally for the Nintendo Switch now and Meridiem Games will release the physical special edition in early 2022. Check out a trailer of the game below: