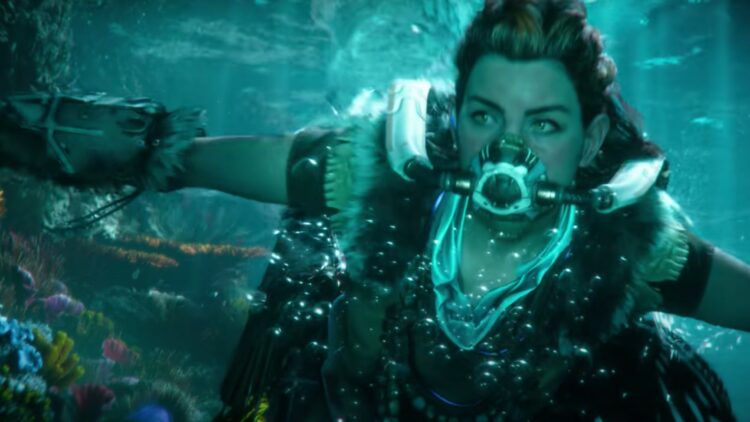 Horizon: Zero Dawn was one of the most popular and critically acclaimed games on the PlayStation 4. A sequel has been announced and ahead of its release, we thought we’d put together a page on everything we know about Horizon Forbidden West. Check it out below.

Horizon Forbidden West – What’s It All About?

Horizon Forbidden West is a sequel to 2017’s hit Horizon: Zero Dawn. The original open-world game, which launched on PC in August last year, earned numerous awards and was praised for its unique setting, taking place on a post-apocalyptic future Earth where dinosaur-like machines roam the world and humans are split into tribal-like clans.

Zero Dawn followed Aloy, an outcast, who ventures out into the world to discover her past and uncover the mystery behind the machines. The sequel will continue Aloy’s story as she’s sent to the Forbidden West where a mysterious plague is infecting and killing humans and machines alike.

An official description for Horizon Forbidden West reads: “The land is dying. Vicious storms and an unstoppable blight ravage the scattered remnants of humanity, while fearsome new machines prowl their borders. Life on Earth is hurtling towards another extinction, and no one knows why.

“It’s up to Aloy to uncover the secrets behind these threats and restore order and balance to the world. Along the way, she must reunite with old friends, forge alliances with warring new factions and unravel the legacy of the ancient past – all the while trying to stay one step ahead of a seemingly undefeatable new enemy.”

Sony announced Horizon Forbidden West at its PS5 game showcase last June with a trailer, revealing the game’s official title. The video also showcased the mysterious plague at the centre of the game’s story, what might be new explorable environments, several new machines, underwater exploration, and a sneak peek at Sylens too.

An exact release date hasn’t been announced for Horizon Forbidden West, but a launch advertisement for the PS5 console from November 2020 that featured the game included a footnote stating that the title has an “anticipated” release date for the second half of 2021.

Shortly after the Horizon:Forbidden West State Of Play on May 27th, developer Guerrilla Games issued a tweet confirming that they “don’t have an exact release date”. However, they stressed that development is “on track” and that they’ll have an update in the coming months.

On June 2nd, Head of PlayStation Studios Hermen Hulst was interviewed for the Official PlayStation Podcast in which he confirmed that Guerrilla Games is experiencing difficulties in motion capture due to the Covid-19 pandemic.

He then explained that Horizon Forbidden West is “on track” for a holiday 2021 release before stating that the date “isn’t quite certain” but PlayStation is working to confirm an official date as soon as possible.

In July 2021, video game journalist Jeff Grub claimed in a Giant Bomb show that Horizon Forbidden West has been delayed to 2022, a rumour that was corroborated by Bloomberg. Sony has not yet announced an official delay, but Grub claims they will make an announcement in a September event.

On August 25, Guerrilla Games announced that Horizon Forbidden West has officially been delayed to February 18, 2022. The delay was announced in a PlayStation Blog post where Game Director Mathijs de Jonge explained that the team were on track to release Holiday 2021 but needed more time to polish the game “to the level of quality we strive for.”

Guerrilla has confirmed that Horizon Forbidden West will release for both PS4 and PS5 consoles.

In an interview with Game Informer, Horizon Forbidden West Game Director Mathijs de Jonge spoke on the differences between the PS4 and PS4 versions of the game. He explained that Forbidden West was developed with the PS4 in mind, and that development and playtesting takes place primarily on PS4 consoles.

He then explained that the PS5 version of the game will feature improved graphics with more detail. He said: “Graphically, the rendering technique for the underwater scenes is special for the PlayStation 5, it has extra details and extra systems, like the wave technique is better on that system.”

What’s more, the PS5 version of Forbidden West will feature cinematic lighting, which the PS4 version can only use in cutscenes. Twitter account Nibel also confirmed via French YouTuber Julien Chiéze that the game will support 60 frames-per-second on the PS5. Finally, the PS5 version of the game will support the console’s 3D audio and the DualSense controller’s adaptive triggers and haptic feedback.

As mentioned above, the announcement trailer for Horizon Forbidden West featured several new machines, most of which have already been named. They include:

In addition to the above new machines, the trailer revealed that two machines from Horizon: Zero Dawn will be returning in the sequel; the rideable Charger and the alligator-inspired Snapmaw.

Not much has been revealed about Horizon Forbidden West’s gameplay, but the game will in no doubt expand upon the original title’s gameplay. Bows, spears, and other weapons will likely return alongside traps and other specialised gear too.

In the May 27th Horizon Forbidden West State Of Play, Guerrilla shared a 15-minute gameplay demo that showcased several new tools, including a shield wing glider, a spear that can be thrown to hurt machines and human enemies, a spike launcher, and smoke bombs that can be used to confuse enemies.

Also in the gameplay demo, Guerrilla revealed that weapons can be upgraded at workbenches and showcased the game’s underwater gameplay, with Aloy using a diving mask for unlimited underwater exploration. When swimming, Aloy will have to face underwater machines and currents.

In addition to the above, the sequel will feature a larger world map. Guerrilla has confirmed that Horizon Forbidden West is set on the West Coast of the United States, with the world covering several well-known locations, including San Francisco and Yosemite Valley.

Ahead of the Horizon Forbidden Dawn State Of Play on May 27th, Guerrilla Games shared information about some of the different clans that will be appearing in the sequel in a series of tweets.

The first new clan announced for the game was the Desert Clan of Tenakth, which reside in the village of Salt Bite on the shores of a lake of the same name. The village is surrounded by birds which provide Salt Bite and the clan’s larger settlements Arrowhand and Scalding Spear with food supplies.

Another clan appearing in the game is the Sky Clan of Tenakth who live among the Sheerside Mountains, guarding them from intruders and threats. Guerrilla states that the clan’s defenses are “impregnable against man and machine” and that no force can “march upon their settlements without being observed from above”.

Guerrilla also revealed plenty of information on the Lowland Clan of the Tenakth, which is situated in the swamps and jungles of Raintrace. The clan’s inhabitants “excel” at tricks and traps, blend into the jungle, and rely on machines to take out foes. The clan holds a tradition in which soldiers are challenged to lasting ten days and ten nights in a nearby dangerous hold. If they succeed, the soldiers will be marked with ink in what’s described as “an honour few survive to receive”.

What’s more, the Lowland Clan of Tenakth’s settlement of Tide’s Reach provides its inhabitants with a view of the Long Coast and the ancient Isle of Spires beyond it.

That’s everything we know so far about Horizon Forbidden West, but keep tabs on this page as it’ll be updated when new information is released.