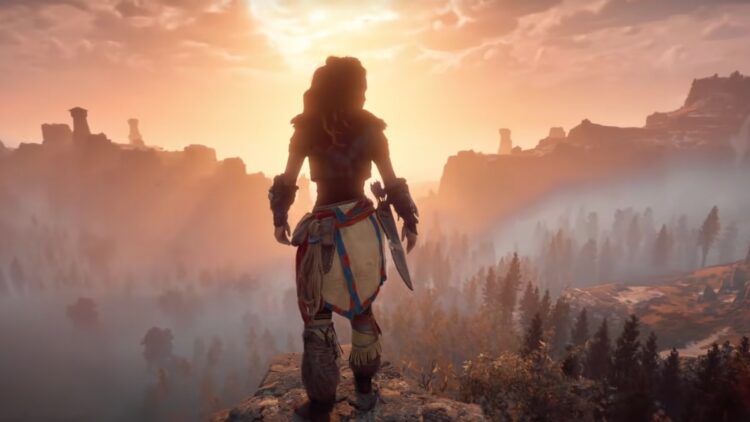 Horizon: Zero Dawn is one of Sony PlayStation’s biggest franchises. The game was released back in 2017 with its sequel is due to launch in February, and it’s expanded into two comic book series. Aloy and the machines from the franchise have also made appearances in other PlayStation games, including Ratchet & Clank: Rift Apart and Fall Guys. If you’re a big fan of the franchise and want to gear up with some Horizon: Zero Dawn merchandise or look for games similar to it, just take a look below.

Talanah, Sunhawk of the Hunters Lodge struggles to find purpose after Aloy, her trusted friend, disappears. When a mysterious new threat emerges in the wilds, she returns to her roots as a hunter to defeat it, only to learn that a whole new breed of mechanised killers stalks the land.

The Sunhawk bridges the gap between Horizon: Zero Dawn and its sequel, Horizon: Forbidden West. The series also introduces one of the new machines appearing in the sequel, along with a new breed of machine that may appear too. It also expands Talanah’s character and adds much more depth to the world of Horizon.

Taking place during the events of the original game, this new arc explores the never-before-told adventures of Aloy and her fan-favourite sidekick Erend as they hunt for a killer with links to his past. As their journey progresses, and the pair fend off a series of deadly machines, Erend reveals the sweeping tale of the liberation of Meridian, and how his sister, Ersa, Captain of the Carja Vanguard, was murdered.

Liberation greatly expands Aloy and Erend’s relationship and Erend himself. It also adds more depth to the lore of Horizon by providing a deeper insight into Meridian, one of the main settlements located in the original game.

The Art Of Horizon: Zero Dawn

Santa Monica Studios rebooted the God Of War franchise in 2018, basing it on Norse mythology. The game follows God of War Kratos and son Atreus as they embark on a journey to fulfil Kratos’ wife and Atreus’ mother’s final wish of spreading her ashes at the highest peak of the nine realms.

The game plays similarly to Horizon: Zero Dawn, featuring third-person over-the-shoulder gameplay, although God Of War does not have an open world, there are open sections or areas that you can explore. You’ll play as Kratos, using his upgradeable Leviathan Axe for melee and ranged combat, with Atreus attacking on command. There are puzzles to solve, collectables to find, skills to unlock, and enemies and bosses to take on.

Days Gone is an action-adventure open world game developed by Bend Studio that was released back in 2019. The game is similar to Horizon: Zero Dawn, featuring an open world and taking place in a post-apocalyptic future. Rather than being overrun by machines, however, the world of Days Gone is ravaged by deadly Freakers.

Set two years after a zombie pandemic, the game follows drifter Deacon St. John who discovers his wife may still be alive and embarks on a journey to find her. Gameplay revolves around using firearms and melee weapons to attack humans and Freakers, and using a Deacon’s motorcycle for transportation and storage. There are lots of missions to complete, collectables to find, and a deeply engaging story to enjoy.

Naughty Dog released The Last Of Us Part II in 2020. A sequel to 2013’s critically acclaimed The Last Of Us, the post-apocalyptic game is set five years after the original game and follows Ellie as she embarks on a quest for revenge after a mysterious group of people murder someone close to her.

Although it’s a linear game, those who enjoyed the tight world-building, lore, and emotional story of Horizon: Zero Dawn will find plenty to love in The Last Of Us Part II. The game has a deeply emotional and divisive story, but has been praised for its visuals, gameplay, score, and acting. It’s well worth a try, although we suggest you play the original game first!

The Witcher 3: Wild Hunt is an RPG by CD Projekt Red that was released in 2015. The game is based on The Witcher book series and is the third and final instalment in The Witcher video game series. Set in a fantasy world, the game follows monster hunter Geralt of Rivia as he searches for his missing adopted daughter as she runs from the dangerous Wild Hunt.

The game is widely regarded as one of the best RPGs of all time; it features a large and lived-in open world, numerous mythological beasts to hunt, deep and engaging quests, and a memorable narrative that will have you jumping on social channels or forums to discuss.