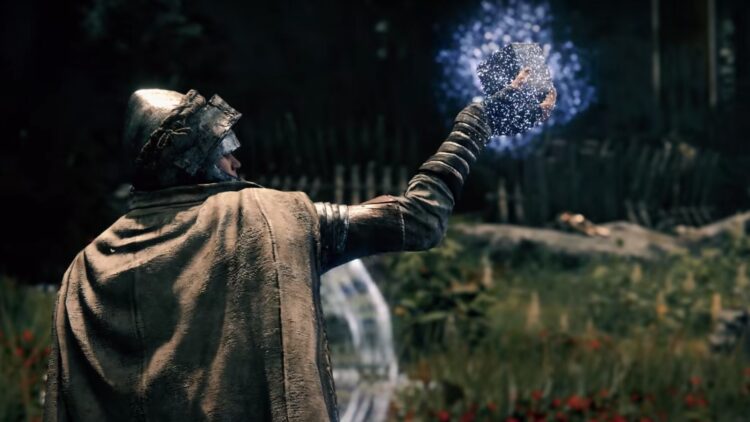 Elden Ring was officially announced at E3 2019 and after two years of silence, developer From Software released a new trailer at E3 2021, announcing a release date of January 21, 2022. Alongside the trailer, a slew of information for the upcoming RPG game was released, and we’ve compiled it into one easy-to-read page. Here’s everything we know about Elden Ring.

What’s The Hype About?

Elden Ring is the latest RPG title from developer FromSoftware, the creators of the Demon’s Souls, Dark Souls, Sekiro, and Bloodborne games. Like most of FromSoftware’s previous titles, Elden Ring is an action role-playing game, but Elden Ring features lore by novelist George R. R. Martin, the creator of the critically acclaimed A Song Of Ice And Fire novel series, otherwise known as Game Of Thrones.

What’s more, the game features a completely open as opposed to Dark Souls and Bloodborne’s more linear world. While the game will feature traditional Soulsborne gameplay mechanics, FromSoftware has made changes to provide players with more flexible combat and a wider variety of options.

In early 2021, Miyazaki expressed confidence that Elden Ring would release in January 2022 for PC, Xbox One, the Xbox Series consoles, PlayStation 4, and PlayStation 5. Unfortunately, FromSoftware announced a delay on Twitter in October 2021, pushing the game back one month from January 21, 2022, to February 25, 2022.

In addition to announcing the delay, FromSoftware announced a Closed Network Test for Elden Ring, taking place between November 12th and 15th as follows:

To take part in the Network Test, users will have to register with the Bandai Namco website here.

IGN spoke with game director Hidetaka Miyazaki, who highlighted some of the changes fans will find in Elden Ring from the traditional Soulsborne games. Firstly, Miyazaki confirmed that Elden Ring won’t focus so much on the stamina bar, which players previously had to manage to dodge and attack. The game will feature a stamina bar, but it has “less influence” as the team wanted to make the game “less restricting” and give players more freedom.

The Dark Souls and Bloodborne games allowed players to call or summon NPCs to help against boss battles, and Elden Ring will feature also feature an assistance system. In the upcoming game, players can collect spirits from defeated enemies that can be used when fighting. Miyazaki states there will be a “large variety” of spirits and they’ll offer various strategic options. Alongside spirits, Elden Ring will have cooperative play.

Elden Ring will also have stealth mechanics like Sekiro, as players will be able to sneak and crouch for backstab attacks. Like Sekiro, Elden Ring has skills – around 100 – but rather than unlocking them via a skill tree, Elden Ring’s skills will be bought or learnt from NPCs. What’s more, Elden Ring does not have a resurrection mechanic, but there will be some “elements” to help push players forward.

Miyazaki also confirmed in IGN’s interview that the game will allow players to customise and craft items on the go using materials found throughout the game’s open world, including health items.

On November 4th, 2021, Bandai Namco released a gameplay preview of Elden Ring, featuring around 20 minutes of new footage of the game’s open world. The new footage was captured running on PC and offered new looks at the game’s multiplayer, in-game map, combat, crafting, multiplayer, and stealth.

As shown in the new gameplay preview, Elden Ring has bonfire-like checkpoints known as a Site Of Grace. These checkpoints can be found throughout The Lands Between and A Ray Of Guiding Light can spring off Sites Of Grace, showing players where to go next. These lights can be followed or ignored.

The video also revealed that the game contains random enemy encounter as a dragon was shown attacking the player while they were exploring on horseback. The dragon was defeated when the player performed a finishing move to the eye, which was highlighted by an orange orb, similar to Sekiro’s deathblows.

Like previous FromSoftware games, Elden Ring features NPC quests, as well as several bosses to take on. The game includes multiplayer co-op, PVP, and invasions, and it allows players to summon in fights. Illusionary walls are back, along with a main NPC known as Melina who will act as the “firekeeper” or “doll” and help you level up.

Speaking of levels, Elden Ring seemingly has eight, including Vigor, Mind, Endurance, Strength, Dexterity, Intelligence, Faith, and Arcane. The game’s currency seems to be called Runes, and the game features Memory Slots too.

While there are many similarities between Elden Ring and previous FromSoftware games, there are several major differences that mark a departure from previous Souls-like titles. For example, Elden Ring has an in-game map that is filled out by collecting map fragments and there are dozens of markers that players can use to highlight areas on the map with resources, dungeons or tough enemies.

What’s more, there are also dungeons and catacombs that players can explore to unlock treasure or take on fearsome bosses, and the game features a more direct focus on stealth, allowing players to sneakily take on hordes of enemies or swiftly move past them if under-levelled. Finally, much of the game’s areas were created to provide players with more freedom in how they take on challenges.

In the IGN interview, Miyazaki shared some first details about the game’s open world. According to the director, the game is set in The Lands Between, which is split into six major areas, each of which is ruled by a demigod. Certain areas will be blocked off from players at the start, but players will have the freedom to approach areas how they want and tackle the demigod bosses in any order.

Elden Ring features a hub area, which Miyazaki says branches out to the game’s main dungeon areas as well as “a wide variety of catacombs, castles, and fortresses, which are interspersed throughout the map.”

What’s more, enemies can be found stumbling around The Lands Between and larger enemies like dragons can be randomly encountered while exploring the open world. Resources can also be gathered to craft new items for combat or consumption.

The Soulsborne and Sekiro games are known for their difficulty and intricate world-building. In the IGN interview, Miyazaki explained that players will play as a character known as the Tarnished. He explained:

“In the world of Elden Ring, The Lands Between are blessed by the presence of the Elden Ring and by the Erdtree, which symbolises its presence, and this has given grace or blessing to the people throughout the land, great and small. What this represented in them is this sort of golden light, or this golden aura, that’s specifically shown in their eyes. And this symbolises the blessing or the grace of the Erdtree. However, after a time, there were some individuals who lost this grace, and the light faded from their eyes. And these are what are known as the Tarnished.

Also revealed today, Elden Ring will once again feature a character creator and the game will feature multiple endings too, none of which players will be locked into. Miyazaki has teased that Elden Ring is FromSoftware’s longest game, taking around 30 hours to complete.