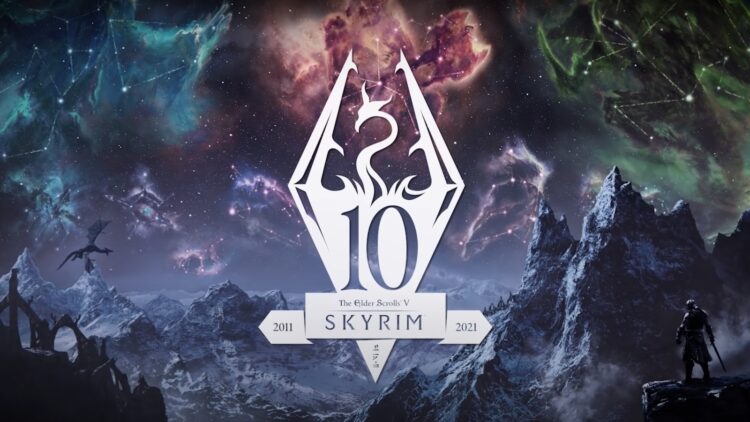 Bethesda has unveiled details of the new Anniversary Edition of The Elder Scrolls V: Skyrim.

The 10th Anniversary Edition will release November 11th, 2021, for PC and all PlayStation and Xbox consoles. The game comes with the critically-acclaimed original game and all of the add-ons from the Skyrim Special Edition release as well as pre-existing and new content from Creation Club.

According to a post published by Bethesda earlier this week, the new edition includes four new creations, which will also be available to owners of the Special Edition. These creations include new quests, gear, and fishing too.

One of the new additions included in the Edition is the Saints & Seducers creation, which includes an additional storyline told over two quests as well as new armour sets, weapons, enemies, and more.

Rare Curios is included as part of the Saints & Seducers creation, and it introduces additional goods imported from all over Tamriel to Skyrim’s Khajiit Caravans. These new goods include ingredients for potions, arrows, and poisons too.

Another creation included in the game is a Survival Mode, which was originally released back in 2017 and adds a new layer of difficulty to the title. In Survival Mode, players must wear warm gear and seek shelter in cold climates to stop from freezing to death, and players will also have to keep an eye on their hunger and exhaustion throughout Skyrim’s hostile world.

The fourth creation included with the Anniversary Edition is fishing, which allows players to catch over 20 unique fish across the game’s open world. The fish can be used to cook and create meals or display them inside player homes in aquariums.

If the above content isn’t enough, the Anniversary Edition will include the Ghosts Of Tribunal where players can earn over a dozen new weapons and armours that were previously available in The Elder Scrolls III: Morrowind.

There’s also The Cause, which sees players encounter the Mythic Dawn who are on a mission to form a new Oblivion gate. The latter includes new enemies, locations, weapons, and a conjurable Daedric horse too.

Bethesda also confirmed in the post that players who own the Skyrim Special Edition can purchase an upgrade to the Anniversary Edition or buy the title separately. There will also be a free next-gen update for the new PlayStation 5 and Xbox Series consoles, although Bethesda will share more details about those in the coming weeks.

The Elder Scrolls V: Skyrim Anniversary Edition will release on November 11th, 2021, for PC, and all PlayStation and Xbox consoles.