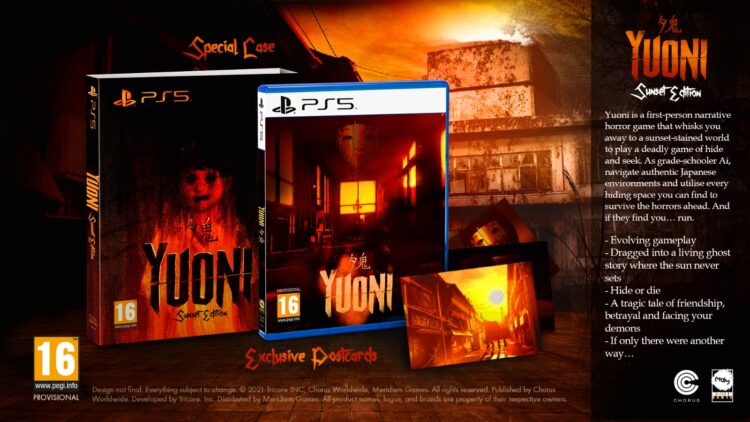 Meridiem Games has this week announced that first-person horror game Yuoni is getting a physical boxed special edition for PlayStation 5.

The game, which was developed by Tricore Inc and released earlier this year, follows a young Japanese girl named Ai in 1990s Japan who is haunted by otherwordly entities in a living ghost story when the sun never sets.

Yuoni features evolving gameplay and requires players to play a dangerous game of hide and seek with abominations from alternate dimensions. Players will need to use gathered items to escape, but must remember the paths taken or risk being trapped forever.

As a mute and anxious ten-year-old girl, Ai cannot defend herself and must take advantage of enemies’ weaknesses and hold her breath when sneaking past blind or deaf enemies or risk a gruesome fate.

The game features multiple endings and includes numerous explorable hauntingly beautiful locations, including a Japanese house, a school, a hospital, and plenty more.

A special physical boxed edition of the game known as Yuoni – Sunset Edition will release for PS5 across Europe on December 3, 2021, and it will include the base game, a specially designed box, and a set of postcards with some of the game’s terrifying artwork.

Watch a trailer for the game below: